As punctual as a Swiss watch, Valve has released the results of the survey of hardware Y software that they make monthly to Steam players so that we can make a idea of ​​the average gamer’s computer of Spain and the rest of the planet that use this platform as well as the trends in the hardware such as the graphics that start to sell more, the “real” impact of 4K on PC or the expansion of Windows 10.

As every month we begin the review of the survey by the processors in which there is no surprise and the same trend that we have seen since 2019 is repeated, which is none other than AMD slowly and steadily eating Intel ground. Lisa Su’s brand already has a 29,54 % of presence while Intel, yes, continues to dominate being present in the 70,46 % of computers. Also in terms of CPU most players have a 4 core processor although more and more have models with 6, 8, 10 and even 12 cores. 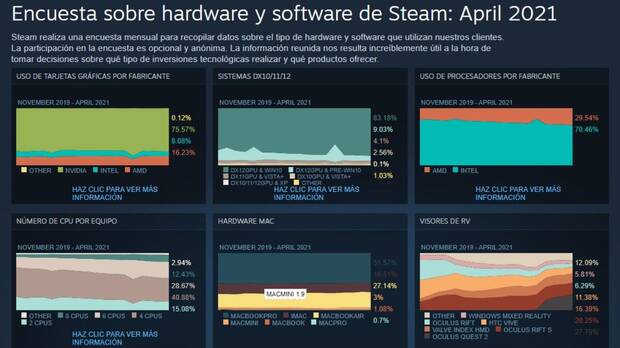 Jumping to the graphics cards, here we have what we call “calm chicha” due to the difficulty of acquiring a GPU today, which makes the survey quite stable in this sense with NVIDIA as the dominant brand with 75.57% usage share followed by AMD with 16.23% and Intel with 8.08%.

The preferred models of each brand are the NVIDIA GeForce GTX 1060 in the case of NVIDIA (although the RTX 2060 and 2070 Super already sneak into the TOP 10) while in AMD reigns the Radeon RX 580 and in Intel la UHD Graphics 620. We also want to highlight that little by little the NVIDIA RTX 30 Series are beginning to be seen in the survey, which is growing month by month. From this range the RTX 3070 is the most popular followed by 3080. 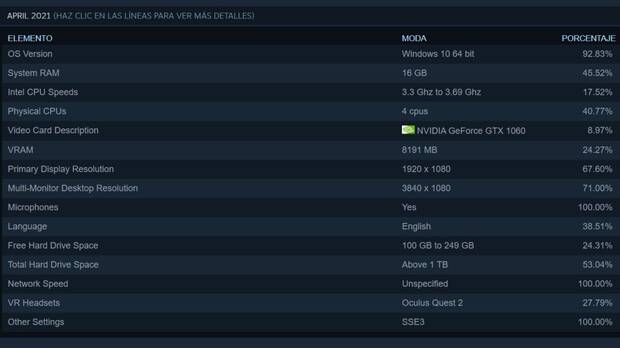 Another point of interest is that of the memoria RAM that continues to rise with a 45.52% of players already having 16 GB of this memory while 26.53% “only” have 8GB and more than 12% already bet on computers with more than 16GB.

The section on virtual reality devices has also been drawing attention for some time after the rapid rise of the Oculus Quest 2 that keep going up to continue leaders with 27.79% usage rate of 2.22% of Steam gamers who own virtual reality headsets.

Finally note that Windows 10 64 bit it continues to rise to already have 92.83% of players who use it, something that is related to the fact that the Microsoft Operating System is already active on 1.3 billion computers.

Microsoft is working on an Xbox exclusive Star Wars game, according to rumors

Skyrim's grandmother, Shirley Curry, becomes a character in the game thanks to a mod