Biomutant It goes on sale today and has had a somewhat mixed reception from the specialized press. There are those who praise the originality of the proposal despite the mistakes, while others think it is a medley of ideas that have not finished curdling as a whole. We have already analyzed it and despite the fact that we have not been convinced by the new proposal of THQ Nordic, maybe you want to give it a try in some of its versions. For it, ElAnalistaDeBits has prepared a complete comparison in which you can see the differences between the versions of the final edition that reaches the physical and digital stores.

Biomutant in backward compatibility mode on Xbox Series X / S and PS5, on PC with a 3080

In the new generation consoles the video game runs on backward compatibility modeas it does not have a native version. We already anticipated last week that the game reaches the 4K 60fps en Xbox Series X Meanwhile in PS5 it also moves at 60fps but only reaches 1080p resolution, due to “technical stability and performance problems”. On Series S, Biomutant offers two options: 1440p a 30 fps o 1080p a 60 fps. The game has been tested on a computer with a graphics card RTX 3080 with all graphic options to the maximum. As can be seen in the video, the game runs smoothly at 4K y a 60 fps. 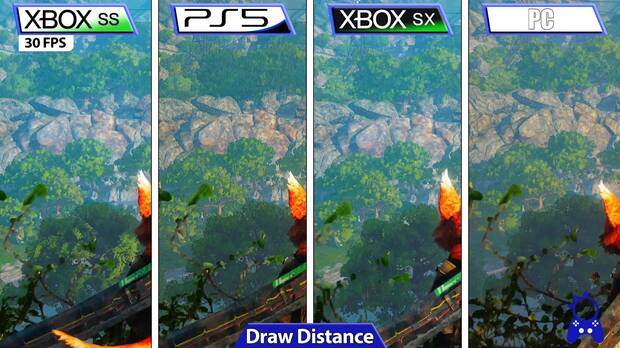 Even though the video game offers 60 frames per second on all platforms, the framerate can hang at 30fps. In the case of Series S, the video game achieves an improvement in resolution, while in the rest of the systems the quality in the rest of the aspects is maintained. The quality of the textures, especially those on the ground, are considerably better on PC than in the rest of platforms. In general, effects like outside shadows are better on computer, but the interior shadows maintain an identical quality in all versions. Loading times are faster on Xbox Series than in PS5, as in other games that run through backward compatibility. With respect to framerate, has some appreciable drops in console, being Series S the one that comes out the worst, although at no time it becomes unplayable, but has room for improvement.

Limited Run Games will have E3 conference: will announce more than 25 physical games