Fortnite: Ariana Grande could earn more than 20 million dollars with her concert

PD 3 August 2021 by administrator
Leave a Comment on Fortnite: Ariana Grande could earn more than 20 million dollars with her concert

PlayStation Spain has announced which will be the free games that PS Plus members will be able to enjoy throughout July. The titles are divided into titles for PS4 -compatible with PS5- and a game for PlayStation 5. Below you can see the complete list of games that can be obtained for free from next week –from July 6 to August 2– with the subscription to PS Plus: 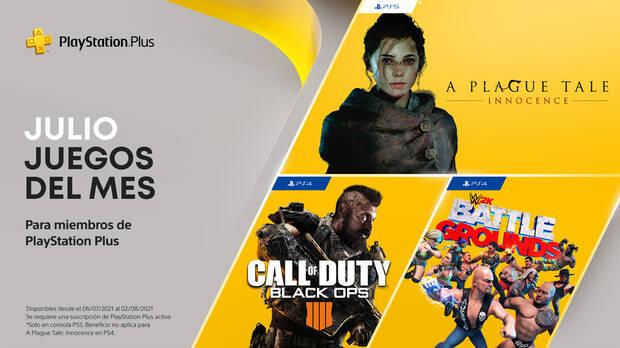 A Plague Tale: Innocence for PS5 is an adventure in which the player must follow the grim story of young Amicia and her little brother Hugo on a journey through the darkest moments in history. It is the year 1349, the Black Plague ravages the Kingdom of France and the Inquisition pursues Amicia and Hugo through villages ravaged by disease. On their way they will have to join forces with other children and use the light and fire to escape the swarms of rats. With the bond that binds their destinies as the only aid, They will have to face unspeakable horrors in their struggle to survive.

Call of Duty: Black Ops 4 for PS4 offers multiple multiplayer battles, the biggest Zombie mode to date and three adventures filled with the undead, plus Blackout, where the Black Ops universe comes to life in a massive all-out war experience that includes the largest map in the history of Call of Duty, the characteristic combat of Black Ops, characters, locations and weapons from the history of Black Ops.

In the professional wrestling title WWE 2K Battlegrounds the player will be able to enjoy arcade combats, have WWE Superstars and Legends battle each other around the world in quirky interactive environments, and compete using special abilities and power-ups in combat types like Steel Cage, Royal Rumble and many more. It has more than 70 Superstars and WWE legends available, a new story mode told through a comic with Paul Heyman and Stone Cold Steve Austin, a multitude of customization parts, and the possibility of competing in online tournaments or claiming the title. The right to be the King of the Battleground against players from all over the world, or fight in local multiplayer with friends and family.

The Five Covens for PS4 is a 3D platform and puzzle adventure for the whole family that tells the story of Brenda, a young witch master in levitation who must escape from the dungeons of the evil Deon Kenot’s castle, overcoming different challenges with the magical powers that the player will unlock throughout the story. The story is set in the land of Gaarth, where five great families of sorcerers reside, each with a different magical power transmitted from generation to generation, whom Brenda will meet along her way. The title has been developed by the Bilbao studio Rborn Games, with the support of the PlayStation Talents program and the Lanzadera business accelerator. In addition, the video game has been made at DeustoKabi, the Innovation and Entrepreneurship Unit of the University of Deusto.

Finally, PS Plus subscribers will also be able to download Waves Out!, a Spanish development supported by the PlayStation Talents program that proposes a platform adventure for the whole family both in solo mode with 13 levels and in a one-on-one competitive mode.

It should be remembered that in addition to the May games on PS Plus, subscribers to this service can continue to obtain in PS5 the titles in PS Plus Collection, a selection of modern PS4 classics that have defined the previous generation. There are a total of 20 games including outstanding works What Batman Arkham Knight, Bloodborne, Fallout 4, God of War, Monster Hunter: World O Person 5.

Sky: Children of the Light, from the creators of Journey, now available for free on Nintendo Switch

Phil Spencer thinks Xbox is at its best