Many of us have suffered during the last months the drama of the graphics card market that has experienced a real madness with GPU prices from NVIDIA and AMD well above those recommended by both brands due to a significant shortage of units in stores in Spain. and also for him boom of cryptocurrencies and their “beloved” miners (note the irony).

Luckily it seems that all this delicate situation that affects many players who want to renew their PCs is coming to an end since for the third consecutive month the price of graphics cards falls notably as shown in the latest report by 3DCenter.org that you can see a little below and in which the “crash” in the price of GPUs from mid-May to July 4 can easily be seen.

If we look at colder data we see how currently NVIDIA and AMD graphics cost 153% more than their retail price recommended by chip makers, which is still a big extra over its “standard” value but is well below the extra 304% we paid in mid-May, at which point prices started to rise. fall. 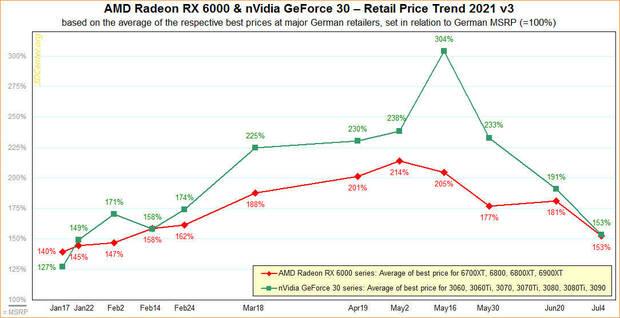 So it looks like we’re nearing the end of the chart price “drama”, at least for now, but we still have a few weeks to go o months to be able to find graphics a its real price and, finally, to be able to have a new GPU for our PC.

A few weeks ago we already told you the key points that are causing the price of the charts to fall and both are related to cryptocurrencies. On the one hand we have NVIDIA limiting its GPUs for Ethereum mining and launching specific graphics cards mining, which is keeping “miners” away from GeForce models intended for gamers.

On the other hand we have seen how China has started to take action Drastic against cryptocurrency activity causing a large drop in values ​​that are already very volatile and sensitive to speculation. This, together with changes in the mining model of Ethereum or virtual currencies that do not need graphics to “mine” as is the case with Chia, are causing the interest of miners in graphics to decline at a fairly evident rate.

Windows 11: the mythical screen of death will also return, but in black