Returnal is the new roguelike Housemarque third-person shooter exclusive to PlayStation 5 coming April 30. This is the studio’s first blockbuster and the most ambitious project by a team that is not exactly new to action titles; on the contrary, Housemarque is a specialist in shooting games, bullet-hell and the most explosive fun since its inception in 1995. From Super Stardust a Returnal, This studio is responsible for the best arcade action to ever come across our screens.

Housemarque had been in the industry for more than a decade when the team achieved its first major success, Super Stardust HD for PlayStation 3, a shooting game that takes place in a spherical world where different waves of enemies arrive. It became one of the biggest releases on the PlayStation Store in 2007 and with time it was adapted to PSP, PS4, had support for stereoscopic 3D and Super Stardust Ultra VR made the leap to virtual reality. It is the game that many fans of the studio fell in love with and already showed the strengths of the team: bomb-proof gameplay, spectacularity and the reinvention of a genre that is believed to be forgotten. Had a 85 of average mark in Metacritic.

In 2010 the studio moved the shooting to a zombie world. With an overhead view, the player and his companions -including cooperative- must make their way into Dead Nation by some monster infested and infected maps, also taking advantage of the environment, such as explosions from vehicles. Again, players praised Housemarque’s gameplay and mastery of more direct action; after passing through PS3 it was adapted to PS4 and PS Vita. Had a 77 of average mark in Metacritic.

In 2011 the developer tried luck with Outland, a 2D platformer that was inspired by a bipolar mechanics similar to the classics Ikaruga and Mirage silhouette: depending on the energy used, the protagonist could pass one type of barrier or another, or attack enemies from the opposite pole; the story could be completed in online cooperative. It was a title praised for its visual style and level of challenge, such a bullet hell of platforms for gamers. Had a 83 of average mark in Metacritic.

Resogun, the first jewel of PS4

Resogun was the launch title for PS4 and over time it has earned the fame of modern classic. Inspired again by the Macian killers, the player must move his ship through a tube-shaped stage where hundreds of enemies and humans appear to rescue. Its addictive gameplay, the hail of bullets, and the downloadable content it received over time extended the fun for years. In addition, it showed that the genre could also be at the forefront in the graphic aspects: the disintegration of the scenes by voxels surprised an entire generation. Had a 84 of average mark in Metacritic.

In 2016 Housemarque returned to “two-lever” action with Alienation for PS4, a shooter with online cooperative for four players where we must defend the planet from waves of aliens. The character classes had different abilities and modifiers, and the adventure took us through different locations in the world – cities, natural landscapes, alien ships. The formula for arcade action, with unique visual effects and the magic that only this team is capable of giving to your projects. Had a 79 of average mark in Metacritic.

Nex Machina was developed in conjunction with designer Eugene Jarvis, and is considered one of the best arcade games of recent years. Influenced by shoot ’em ups and Resogun, from which it took some elements in terms of design and technology -such as voxels-. A must for fans of the most brutal action. Had a 88 of average mark in Metacritic.

In 2017 the team returned to a 2D development, full of action and platforms with a sci-fi aesthetic. In Matterfall our protagonist has a combat suit that offers everything we could hope for in terms of mobility and speed: 360 shots with the right lever, double jumps, secondary weapons with time-recharging grenades and other rifles-, and a control agile enough to face dozens of enemies and hundreds of shots on the screen. Had a 72 of average mark in Metacritic.

Returnal, the newest Housemarque, on sale April 30 exclusively for PS5

Returnal is he new housemarque game that will go on sale exclusively for PS5 on April 30, an intense action adventure that combines the master in the genre of the study with an interesting structure roguelike and an intriguing science fiction story, being the most ambitious game to date of this very talented study.

It can be purchased in both physical and digital formats through the PlayStation Store. If we opt for the latter, we will have two editions, the standard one for 79,99 euros and the Digital Deluxe to cost 89,99 euros, giving us access to different extras such as a pair of weapons, an artifact, an enhancer or the soundtrack of the game. 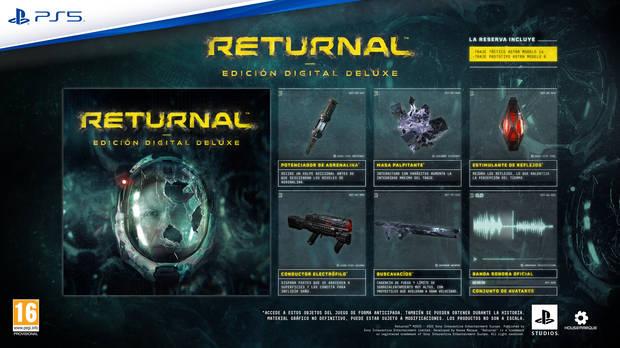 Saint Seiya, The Knights of the Zodiac in Spain, comes to the popular MMO Lords Mobile