Insomniac Games It has always been characterized by endowing its games with an original arsenal and, on many occasions, full of humor. Ratchet & Clank: Una Dimensin Aparte is thrown in PS5 the 11th of June and in a new video published in the last hours we have been able to see some of the gadgets and weapons that Ratchet and the new lombax Rivet will be able to use in this great adventure, which promises to take advantage of all the possibilities of PlayStation 5, from its spectacular graphics section to the use of the DualSense with adaptive triggers customized for each weapon, and optical response to any explosion and damage received.

One of the most useful tools in this video is the Hilabrechas, a hook that allows us to enter a dimensional gap and thus travel to another place on stage in an instant. Keep an eye on these portals because you will be able to move with them from one side to another in the combat arenas or during the exploration of their scenarios: the jump between dimensions is not only a key part of the plot, but also of their gameplay. Jump into action, jump between dimensions, use your hovercraft boots, and soar through the skies of cities with new gadgets that will defy the laws of physics.

Ratchet & Clank: Una Dimensin Aparte be the most agile installment of the saga and have new possibilities of movement. Ah we have the Ghost Sprint, a gadget that makes us “temporarily cease to exist” to dodge attacks thanks to an evasive movement. Hit it with wall-running parkour movement and you’ll have hilarious gameplay that gives you more freedom of movement than ever.

A lot of fun weapons to defeat your enemies

On Ratchet & Clank: Una Dimensin Aparte We will also find an arsenal of offensive weapons, renewed classics and new: from the Supernova Whirlwind, to the Executor, the Sizzle, the Ice Bucket, the Machine Gun or the Negatronic Accelerator. Each weapon is unique and specialized in some type of situation, enemy or secondary effect; Some weapons shoot plasma, standard ammunition, electrocute enemies, freeze them in blocks of ice or jump into the air, while the pixelator will pixelate the creatures in 16 bits instead of 8 bits. It is just a small sample of the creative weapons at our disposal that we will see in A separate dimension.

Our contact with this equipment is the DualSense, the ones that the PS5 controller take on great importance. For example, one of the weapons allows us to place a ball that will hit our enemies every time we press the trigger with the peculiarity that if we do it rhythmically we will do more damage, a timing that we can know thanks to the sensations that we transmit the DualSense hepatic feedback to the hands. These adaptive triggers darn a personalized touch to the resistance of each trigger, and depending on how and how much we press them we can unleash different effects, different types of shots or attack charge slower but much more damaging.

The new adventure of Ratchet, Rivet and Clank promises to take the saga to a new level in all its sections, and fans of action will find here the most spectacular installment, with new characters, more adventures and new challenges that will test our skills with a devastating arsenal.

Ratchet & Clank: Una Dimensin Aparte will go on sale in a standard edition in both physical and digital formats for 79.99, and will also be available only in PS Store a Digital Deluxe Edition for 89.99 which includes the game and the following extra content: 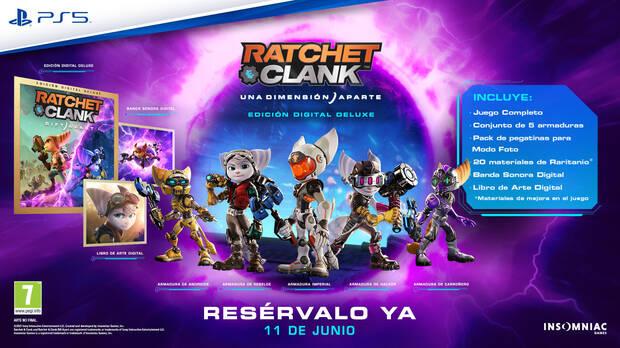 In addition reserving the game on PlayStation Store, either the standard edition or the Digital Deluxe, you will also get the early unlocking of two game extras: Pixelator Weapon and Carbonox Armor Set.

Ratchet and Clank: A Dimension Apart: This is how their graphics have changed since Gamescom 2020

Mass Effect Legendary Edition: The 15 Most Beloved Characters of the Trilogy