We started Monday with the “fashion theme” in the world of hardware and also in the economic one, that is, we start with cryptocurrencies and their “mines” or “farms” places where teams are created with a multitude of connected graphics to carry out certain processes that allow their holders to receive Ethereum or some other crypto, processes that are commonly known as “mining”.

During the last few months we have shown you a lot of these mines, some even inside the trunk of a BMW and today’s one is special because it uses NVIDIA’s most powerful graphics and because, given the scarcity of graphics, the miners seem to want to start taking better care of your GPUs by looking for more advanced cooling solutions than cold rooms and some fans.

This time we are shown a system with 10 NVIDIA GeForce RTX 3090 graphics that reach temperatures between 41 and 49 in mining processes thanks to a liquid cooling. These graphics support about 93 of maximum temperature so reducing them to almost half allows to increase the useful life of these GPUs. In addition, that same system we see that it has a placa base MSI B360-F PRO supporting up to 18 graphics and three 1600W Super Flower Leadex Titanium power supplies power each. 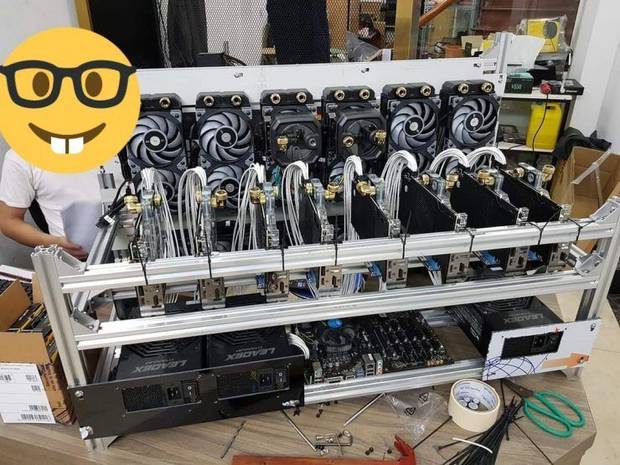 Also as a curiosity you can see down here another mine with also graphics ASUS ROG Strix GeForce (the specific model is unknown) operating with a mineral oil cooling Non-conductive that allows all equipment components to be kept at a low temperature.

The NVIDIA Solution: Graphics for Miners and Reducing the “Mining Power” of GeForce

Precisely to avoid images like the one in this news (that is, mines full of graphics intended for gamers) NVIDIA wants to “fight” against the miners in two ways. The first reduce the mining power of your RTX 3060 graphics (said to do so with the 3080 Ti too) and the second is create specific chart models specially optimized for mining. With this they want to make GeForce graphics no longer attractive to these miners who will be able to have their own product on the market.