Ubisoft has announced Mario + Rabbids: Sparks of Hope, a sequel to Ubisoft + Rabbids: Kingdom Battle launched in 2017. Exclusive to Switch and co-produced with Nintendo, it is a strategy game that will become 2022. In the Ubisoft Forward has shown a cinematographic thriller and a short gameplay of just a minute and a half that you can see below.

Players will be able to build a team of three heroes out of a total of nine, both from the Champin Kingdom (Mario, Peach, Luigi, Estela …) and versions rabbits of well-known characters. Each of them will have special abilities Useful in battles that mix the tactics of the turn-based combat with real-time action: you can jump on allies, slide against opponents …

Customizable characters and worlds to explore

The characters can customize with Sparks, who will have to be rescued throughout the galaxy and who have been born from the mixture of Lumas and Rabbids. There will be dozens of them, each of them with their power and personality, such as energy barriers or the possibility of summoning showers of fire, very necessary to defeat the minions of Cursa.

Cursa is the lousy baddie of a plot that promises “surprising final boss”enemies of both the Rabbids and the nintendo universe, and an interplanetary journey where there will be explore each world to meet its inhabitants and discover its secrets. Also, the game will expand after launch. 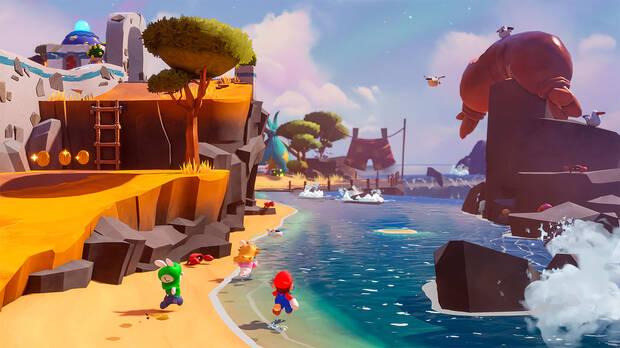 Mario + Rabbids: Sparks of Hope is just one of the many announcements that Ubisoft Forward has brought us, where news has been given about the expected game of Avatar From creators of The Division, It has been shown gameplay from Rainbow Six Extraction, the release date has been set to Riders Republic, and has been presented Rocksmith+, among other things that you can consult in our summary of the event.

Avatar: Frontiers of Pandora: First Look at Adventure for the Next Generation