Genshin Impact It has been a real phenomenon since it debuted in September on mobile devices, PC and PS4, both in Spain and around the world. In the span of these 6 months, only in mobile devices has managed to raise more than 1 billion dollars, as reported from Sensor Tower. Let us remember that, since its debut, the title of miHoYo has continued to implement a series of content updates that will have served to keep the game formula fresh and incentivize spending of the users. Just this week we can get a new code of 60 Protogems for free for a limited time (for example, a pack of 3000 protogems is priced at 5 euros per month).

Genshin Impact is still the goose that lays the golden eggs

Since Genshin Impact It was launched on the market on September 28, 2020 and became a worldwide success. As they remember from Sensor Tower, in its first five months it managed to raise $ 874 million on the App Store and Google Play. “Player spending has remained at an average of about $ 160 million per month since December, and so far in March the title has accumulated more than 148 million “, they write from the firm. March is on track to become the best month in the game since October, when i got raise $ 233.7 million only on mobile devices.

On the other hand, during the last 30 days Genshin Impact has positioned itself as the third highest grossing game in the App Store and Google Play combined, just behind PUBG Mobile Y Honor of Kings from Tencent. If we move out of China, the title of myHoYo has been the highest grossing mobile game, accumulating more than 129 million dollars internationally during the last 30 days. That also makes it the number one RPG both inside and outside of China. 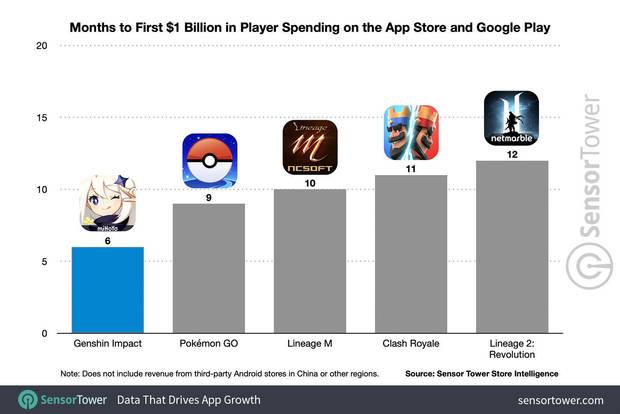 Genshin Impact, the number one RPG both inside and outside of China

Become the best international release of a Chinese game, Genshin Impact it is also the title that has managed to reach the figure of 1 billion the fastest of dollars in the App Store and Google Play, in just under six months. To get an idea, even the popular Pokmon GO de Niantic it took 9 months to get this figure.

As they have argued since Sensor Tower, Everytime that Genshin Impact introduce a new character spending spikes occur by the players. “The introduction of Hu Tao caused revenue to rise to about $ 13 million in a single day, March 2; while the appearance of Xiao saw players spending more than $ 15 million February 3, “they write.” By comparison, Genshin Impact It has generated an average of $ 5.8 million a day since launch“.

Generates $ 5.8 million per day on average

Currently the players of Genshin Impact enjoy the content of update 1.4: this patch adds the character Rosaria, Encounters and many more details. The title is available in both mobile devices like on PC and PS4; while waiting to launch as well on Nintendo Switch and on PS5. “Fun, huge … and free. MiHoYo launches the role-playing game that could revolutionize ‘gacha’ in home systems”, we write in our analysis. And if you want to know all the secrets of the game, we invite you to consult our complete guide.

Call of Duty: Warzone deletes the accounts of over 13,000 cheaters

Auto Chess, the free game, will have a version for PlayStation 5 on March 30