Soon in Spain and the rest of the world Genshin Impact brand new New Character playable as part of its version 1.4. The character is Rosaria, a blessed nun who was already advanced a few weeks ago, but of which until now we do not know some details. For this reason miHoYo has launched a new demo trailer of the character that we leave you next, along with some cards that provide more details about his history, characteristics and abilities unique.

Features and history of Rosaria

“A nun from the Church of Favonius in Mondstadt. At first glance she looks like a member of the clergy, but her demeanor is not that of a normal sister. She has less respect for the gods than ordinary citizens and never participates in the activities of the church. Church. It is like a shadow moving stealthily through the streets of Mondstadt. Rosaria is a lonely woman who belongs to the Church … although only in name. But don’t forget that extremes always coexist: where there is light, there are also shadows. “.

Today we introduce you to Rosaria, one of the sisters of the Church of Favonius!
A nun who, apart from her clothes, no one would say that she belongs to the clergy. Her coldness towards everything makes her extremely incisive.

Rosaria is a character that in the words of miHoYo; “causes harm in many different ways”. He can attack with his versatile Elemental Skill or deal continuous damage to enemies in the vicinity of his Ultimate Skill activity and assist other team members during combat. Below we show you the talents featured of Rosaria’s character:

How can you get Rosaria? 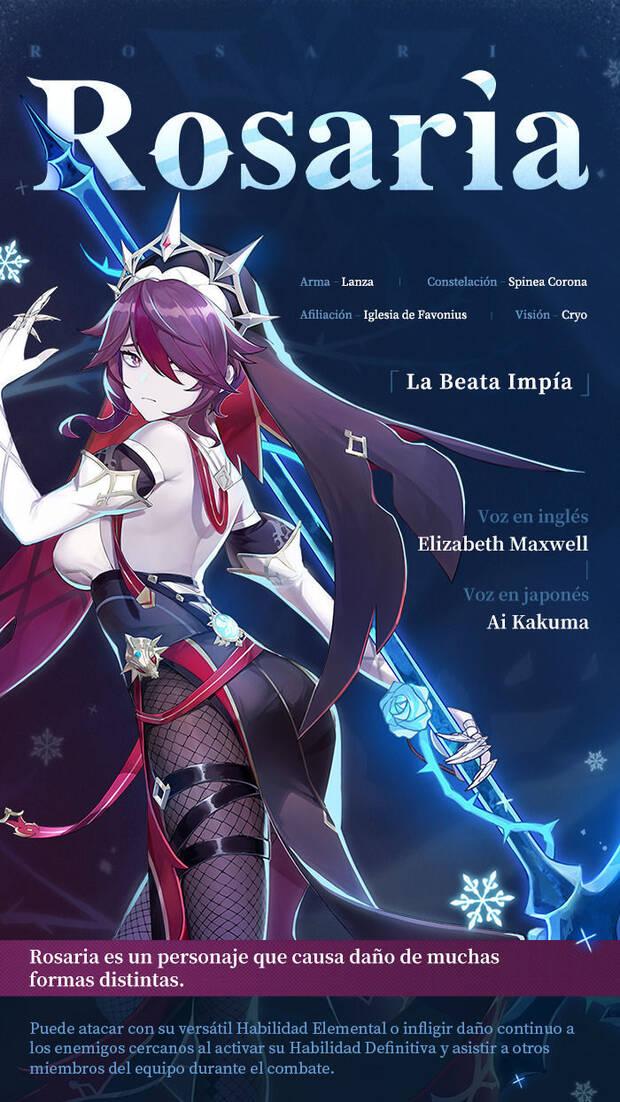 Many players will be wondering how to get to Rosaria at Genshin Impact. Like so many other characters in the game, she can be obtained through the wishes of the Gachapn. For now the last indications point to Rosaria arriving as part of a Tartaglia banner, which will be added to the game. next April 6 2021. When the wish is available, players can spend our Protogems on it to make rolls.

We remind you that you can visit our complete guide to know the best tips and tricks from the miHoYo game. Genshin Impact It is a JRPG and Role free to play available in PC, PS4, PS5, y mviles Android e iOS (coming soon to Switch). If you want to know more about him, do not hesitate to read our analysis.