During this weekend, from June 18 to 20, we can find a wide variety of promotions that allow us play for free or at a discounted price on all platforms: with some we can download and obtain new games at zero cost to keep them forever in our libraries, others allow us to try certain titles without paying for a limited time, and with the weekend offers we can take advantage of to add new Works to our PS5, Xbox Series X / S, PS4, Xbox One, PC and Nintendo Switch with discount included. Below we have compiled the best promotions of the weekend so you don’t get lost among so many possibilities:

Hundreds of free demos on Xbox and PC

This weekend Xbox y Steam have agreed to give us one of the best possible ways to try many free games in one go: demo festivals. The corresponding events are already available on both platforms: on Xbox we can try more than 40 demos at the Summer Game Fest Demo Event, which will last until June 21, and on PC we have hundreds of demos from the Steam Next Fest, which will run until one more day, June 22.

So that you don’t get lost among so many free demos, we have selected some recommendations that will guide you in these demo festivals. These are some of the most interesting games you can try:

As you know, Xbox Series X / S and Xbox One users subscribed to Xbox Live Gold can enjoy new free trials every weekend thanks to the Free Play Days that offers the game service online of payment. This week the highlight is Rainbow Six Siege, The popular shooter Ubisoft first-person multiplayer.

This shooter game is now available free to Xbox Live Gold subscribers and can be tried without paying until Sunday June 20. During that period, its standard version will be accessible on Xbox Series X / S and Xbox One, with the ability to keep progress in case someone decides to buy it after the free weekend trial. For this, in addition, a series of discounts have been activated that will come in handy to those who want to keep it forever: 75% discount for the base game55% for the Operator Edition and 45% for the Ultimate Edition.

Another of the free games available this weekend in the Free Play Days de Xbox Live Gold es PGA Tour 2K21, the latest installment in the famed golf simulation saga from 2K Games and HB Studios. Not only is this game free to try on Xbox Series X / S and Xbox One, it can also be tried for free by members of Stadia Pro, the paid subscription to the Google Stadia cloud gaming service, which is available on both PCs and iOS and Android mobile devices.

In the case of Xbox players subscribed to Xbox Live Gold, a membership included in the payment of Xbox Game Pass Ultimate, during this weekend they can stay with PGA Tour 2K21 forever taking advantage of the 67% off available in the platform’s digital store; yes, this offer is valid only for your Digital Deluxe Edition, since the standard edition of the game does not have any type of discount applied during these days.

Verdun, WWI battles for free this weekend on Xbox and Steam

The third game of the Xbox Live Gold Free Play Days is Verdun, a realistic first person shooter game set in some of the most famous battles in the world. First World War. Members subscribed to the game program online Xbox Series X / S and Xbox One can try it for free until Sunday, June 20, but on PC it can also be played without paying during the same period thanks to a free trial that has already started in Steam. 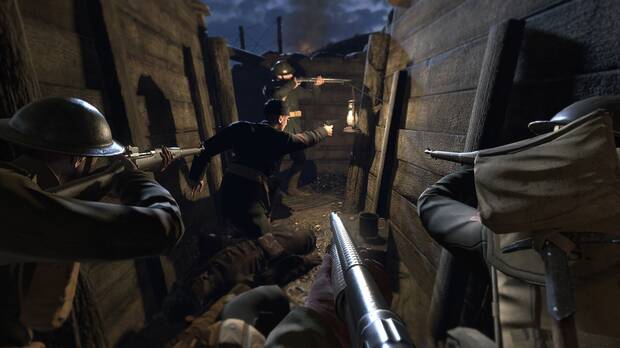 Verdun can be purchased at a reduced price on both Xbox and Steam, taking advantage of the promotion that allows you to try it for free during the weekend: those who want to keep it forever on Xbox Series X / S and Xbox One can do so with a discount of 60% in its standard edition, the same that applies to Tannenberg, its most recent delivery that It is also available for free during the weekend. Both are also available in a bundle with 65% discount on its usual price. There is also a similar range of discounts on Steam for Verdun over the weekend, with the standard edition lowered by 60%, among other offers.

Other free games on the Epic Games Store, Steam, PS Plus and Xbox Live Gold

In addition to all these free trials, this weekend there are quite a few more games that can be tried or obtained at zero cost on practically all platforms. In PC there are several possibilities, in fact, like the free games of Epic Games Store what this week are Overcooked 2 Y Hell is Other Demons; Both will be available for free until June 24 at 7:00 p.m. (Spanish peninsular time).

If you want to continue trying free games this weekend, in Steam the promotion that allows you to play without paying Orcs Must Die! 2, a fun third-person fantasy action title that you can try at zero cost until June 20. We remind you that it is also still available for free Tell Me Why, a narrative work from DONTNOD Entertainment and Xbox Game Studios that can be added to the library free of charge throughout Pride Month.

It should also be remembered that the players of PS5 and PS4 on the one hand, and those of Xbox Series X/S y Xbox One On the other hand, the free games included in your monthly subscription to PS Plus y Xbox Live Gold respectively. For the first service, members can now get Operation Tango (PS5), Star Wars: Squadrons (PS4 and PS5), Virtua Fighter 5: Ultimate Showdown (PS4 and PS5) and Waves Out! (PS4 and PS5), while the second can be downloaded Injustice: Gods Among Us, The King’s Bird Y Shadows: Awakening.

Since everything is not going to be free games, then we leave you with some of the most interesting offers of the many available this weekend on PS5, PS4, Xbox Series X / S, Xbox One, Switch and PC.

Offers on PS5 and PS4

Deals on Xbox Series X / S and Xbox One

FORTNITE: New Items and Skins from the Daily Shop - June 18