Final Fantasy VIII Remastered, the classic 32-bit role-playing game with some new graphical and playable features, is now available in iOS and Android digital distribution stores in Spain and the rest of the world. This revision was released on consoles and PC in September 2019 and its debut price is 18.99 , although after April 4 it will go to 22.99.

Like the original, the adventure proposes us to follow in the footsteps of Squall, a SeeD, a member of the elite corps formed in the Gardens, who must fight against the threat of witches. This story will evolve with new rivalries, romances, and the strange visions of Laguna, a soldier who appears in the protagonist’s dreams. Regarding the graphics, Remastered slightly update some modeling and textures -but not much so that they do not clash with the rest of the graphics- and it adds the options to accelerate the combat to triple speed, eliminate the random battles and empower the characters to the maximum during the combat. You can learn more with our analysis.

Some remarks about this version

Square Enix indicates that its weight is 2.59 GB and that the cloud saving and controller support options will be implemented in a later update. They also recommend not using the x3 speed option in places with less mobility, because it can complicate control. 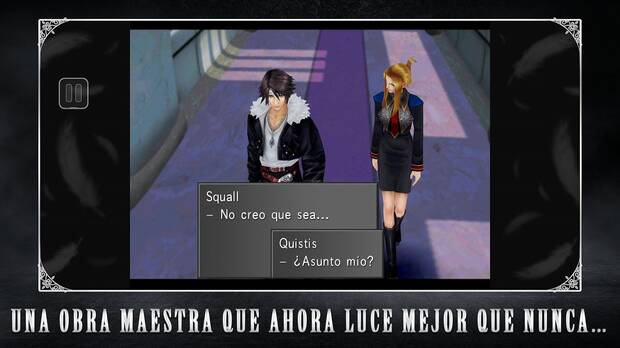 It also warns about the possibility of leaving the vehicle stuck during the exploration of the world map: “Sometimes, when entering or leaving vehicles or the Garden, the character may get stuck between the vehicle and the terrain, or the vehicle may be immobilized. This most often occurs when exiting the vehicle near impassable terrain or when attempting to enter or exit the vehicle during certain events. Right now the only solution is to reload a previously saved game, so we recommend saving your progress frequently. “