After a year on hiatus due to the coronavirus pandemic, the E3 2021, although in this edition in a totally digital: Although the lack of a face-to-face event prevents the games from being tested, the conferences will not be affected: Nintendo, Xbox, Ubisoft, Warner Bros., Square Enix and many others will have a presentation between June 9 and 15.

In addition, the Summer Game Fest that started last year continues in this edition, so beyond the digital opening gala, there will be announcements throughout the summer. And without forgetting the EA Play Live 2021 of Electronic Arts that will take place on July 22. In this article, which we will constantly update, we review the dates and times of all conferences, and below, we explain what is known of every one of them.

Week of E3 2021: Date and time of all conferences and events 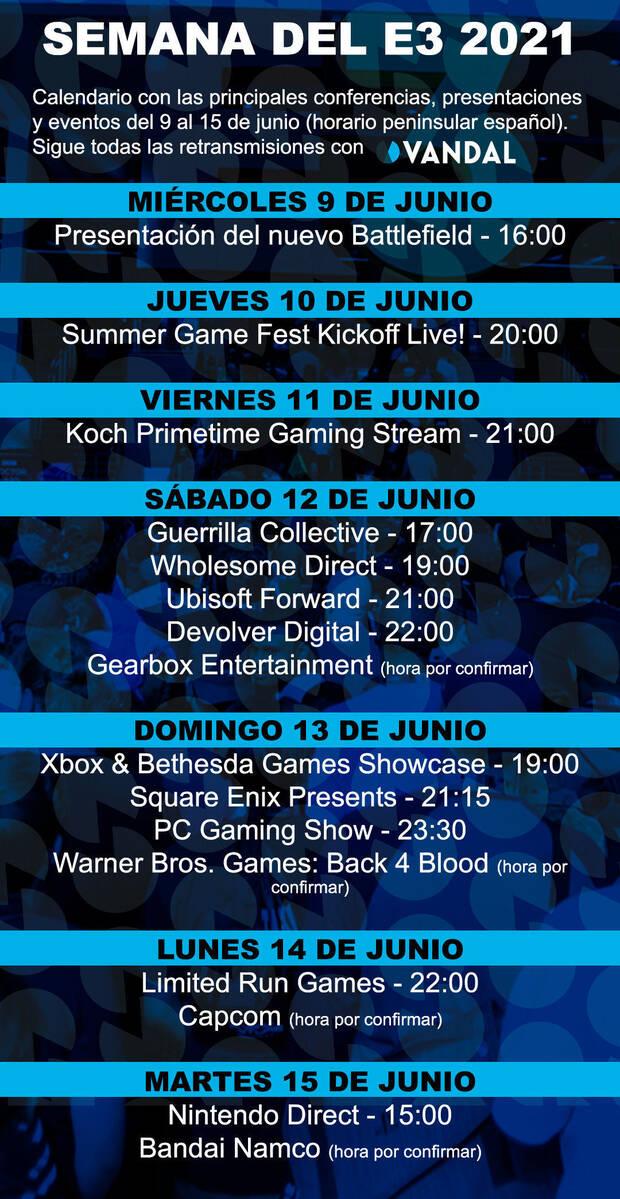 What will be presented at conferences?

The Summer Game Fest organized by the Geoff Keighley team (The Game Awards) kicks off on June 10 at 8:00 p.m. In the event will be shown more than 30 gamesBoth brand new announcements and title updates already published. There will also be concerts from Weezer, Japanese Breakfast and Sonic Symphony and will appear on the broadcast Jeff Goldblum, Giancarlo Esposito and more names to be confirmed. After the main appointment, the Day of the Devs, the Double Fine Productions and iam8bits event where small independent developers present and talk about their games.

It’s the most wonderful time of the year.

Thursday, #SummerGameFest Kicks off with a spectacular live event — with 30+ games, special guests, musical performances, Day of the Devs and more.

Here’s the hype trailer I personally edited to get us all in the mood for this summer. pic.twitter.com/fLLrnxVeaO Geoff Keighley (@geoffkeighley) June 6, 2021

The editor Koch Media will have a digital presentation on June 11 at 9:00 p.m. It has not been specified what they will talk about, but it has been confirmed that there won’t be any deep silver, the brand that owns the development teams of Dead Island, Saints Row Y TimeSplitters.

This year, Guerrilla Collective It has been divided into two appointments: one on June 5 and another on June 12 at 5:00 p.m. It is an event focused on independent games and they promise a “lot of exclusives.” Among the confirmed titles are Sable, Serial Cleaners, Potion Craft Y Hello Neighbor 2.

The Wholesome Direct 2021 It will take place on June 12 at 7:00 p.m. This is a digital presentation of “inspiring, friendly and welcoming” games. More than 75 titles will be shown during the appointment and some will premiere while the event happens.

#WholesomeDirect returns on June 12 at 1pm ET! 📺 We’ll have new game reveals, exclusive footage, and even games that will launch *during* the show! And thanks to our pals at @GuerrillaCollec, @Twitch, @IGN and @GameSpot, Wholesome Direct will reach even more players this year 🥳 pic.twitter.com/NGy9TrSWyd Wholesome Games (@_wholesomegames) May 12, 2021

The Ubisoft Forward start at 9:00 p.m. and be focused on Rainbow Six Quarantine, on Far Cry 6, on Riders Republic and in new content for Assassin’s Creed Valhalla Y Rainbow Six Siege, in addition to audiovisual works Mythic Quest Y Werewolves Within. An hour before there will be a presentation of additional content for the games as a company service, and an hour later another section focused on Rainbow Six Siege and your community.

The irreverent independent game publisher Return Digital broadcast your digital presentation on June 12 at 10:00 p.m.. It is unknown what they will present, but they usually present several games in a conference marked by humor and with a tone of horror production of series B.

The Microsoft and ZeniMax event begin on June 13 at 7:00 p.m. and will have an hour and a half duration. During that time we will know the news of Xbox Game Studios, from Bethesda and the rest of ZeniMax studies. It has not been confirmed which games there will be, but the promo art for the quote shows Halo Infinite Y Starfield.

The Square Enix conference will be the June 13 at 9:15 p.m. and will last for 40 minutes. The new Eidos-Montreal game will be shown there (Deus Ex: Human Revolution), Babylon’s Fall, the next contents of Marvel’s Avengers and news about Life is Strange: True Colors, plus some surprises. 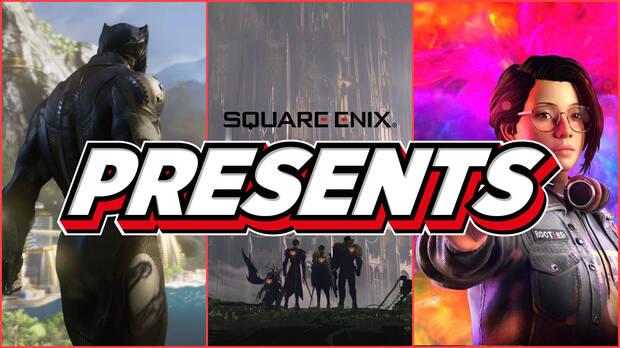 The PC Gaming Show, the conference dedicated exclusively to computer games (although multiplatform titles are also shown) will take place on June 13 at 11:30 p.m.. We know there will be a message from Valve on Steam, information on Naraka Bladepoint, new details of Dying Light 2, news about the saga Orcs Must Die! and much more.

On Monday June 14 at 10:00 p.m. the editor Limited Run Games they will have a conference where they will show the next videogames that will be published in physical format and the different special editions.

The Nintendo Direct will take place on June 15 at 6:00 p.m.. It will last 40 minutes and focus on games coming to Nintendo Switch “mostly” in 2021. There will be a Nintendo Treehouse: Live where the Nintendo team and developers will play live various games giving more details about them.

On 06/15, Nintendo will participate in a completely virtual way in the #E32021. Do not miss a presentation at 6:00 PM (peninsular time) #NintendoDirect with about 40 minutes of exclusive information on games to #NintendoSwitch which will mostly be available in 2021. pic.twitter.com/PeAhOCPizI Nintendo Espaa (@NintendoES) June 2, 2021

'Be Chaotic Great': Gearbox and 2K Games announce their new game on June 10