It seems unbelievable, but it’s been a year since Call of Duty: Warzone landed in Spain and everyone almost by surprise, becoming a whole phenomenon within the free to play games of Battle Royale character. Activision has planned a way to celebrate this first anniversary with the entire community of players, allowing anyone to know your statistics play for the last 365 days. How? Very easy, you just have to follow a few simple steps in the social network Twitter. We will explain everything to you below.

How to find out your COD Warzone statistics for the last year?

One year of Warzone. Countless matches.

Celebrate the first year of dropping in by showing off your @CallofDuty #WarzoneReport. Tap below and tell us your Gamertag to earn your bragging rights.— Call of Duty 🧟 (@CallofDuty) March 10, 2021

In it we can read that to celebrate the first year of Call of Duty Warzone, Activision has launched el hashtag #WarzoneReport with which we can know the statistics of our profile within the game. The way to participate in this proposal it is very simple:

It is important to note that the Gamertag has to be made up of your username plus the numeric ID that you have associated on the Activision platform. You can find this one on the corner top right of the menu Warzone main after you have logged in. An example would be the following: “NameGamertag # 0000001”. 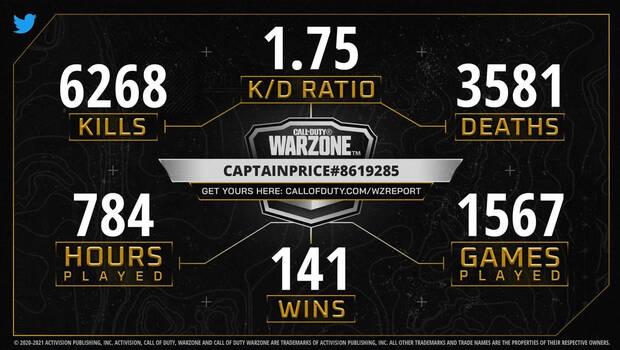 After posting a reply to the Call of Duty tweet, the company I will respond by sharing an image with your statistics last year’s game. These statistics include: the number of kills performed, the K / D ratio, the number of deaths, the total hours of play, the victories of games played and also the total of games played. An interesting way to know how much time you have dedicated to the game and share it with your friends.

At this point there is no doubt that Call of Duty Warzone it has been a resounding success for Activision and the brand. Last February the company shared a report in which it was noted that Warzone had received 100 million players every month in 2020. In addition, Rob Kostich, the president of Activision, publicly acknowledged that COD Warzone has become the most important title in the franchise right now: “Warzone is going to be our central game and be in front for a long time”.

Since its launch, free to play has received millions of downloads all over the world. In December 2020 it already exceeded $ 3 billion in benefits. We are sure that this second year of life will go as well or perhaps better than the first. We will be attentive to see what direction the Battle Royale takes.