The players of Call of Duty: Warzone Y Call of Duty: Black Ops Cold War they looked forward to the new update reloaded of the current Season 3 and this is already available from today, May 20th of 2021, to add to the title a lot of news and new features. One of the main protagonists of this patch is the Action Heroes of the 80s event, which includes the two new operators Rambo and John McClane, which we have already revealed in another news how they can be achieved.

Next, in this news, we focus on summarize the details shared on the official Activision blog about the changes included in the Temporada 3 Reloaded, so you know what’s new in both titles.

The Season 3 Reloaded update has a download size approximately 7.1 – 13.1 GB for those who have the full version of Black Ops Cold War, and 14.6 – 18.1 GB for those with free Warzone and the latest updates to either or both games. Specifically, these are the sizes of the update download for each of the two titles and on their different platforms:

We put the heroes. You put the action.

Get ready for the ’80s Action Heroes Season 3 reloaded event on May 20 at #BlackOpsColdWar Y #Warzone. pic.twitter.com/jEyUivR1fF— Call of Duty Espaa (@CallofDutyES) May 18, 2021

All the news in COD Warzone from Season 3 Reloaded

For starters, the new Season 3 Reloaded update adds some iconic places in Warzone For a limited time, related to the Action Heroes of the 80s event, they are as follows: 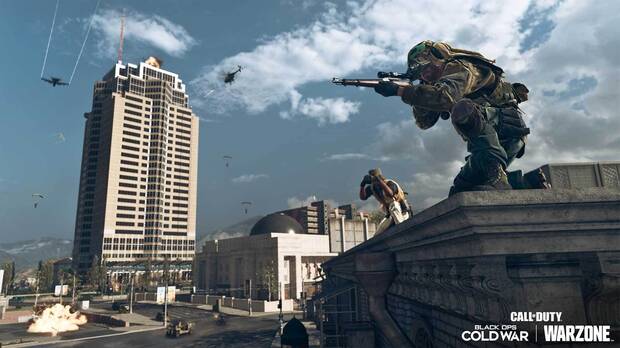 In addition there is also a new limited time mode, Powerful. This game mode puts more than 100 operators in squads of certain sizes in a battle for the supremacy of prominence. The starting circle is smaller than in a traditional Verdansk Battle Royale. The closing of the circle will have five phases, and no gulag to escape death.

The combat arc is the new kill streak It adds an explosive touch to any weaponry in Verdansk or Rebirth Island and is effective against both infantry and vehicles. Nor should we forget that the ballistic knife has come straight from Black Ops to Warzone.

COD Black Ops Cold War tambin receive many news in Season 3 Reloaded. Among them we highlight the following: