Strictly Limited Games and ININ Games have shown the first teaser trailer for Clockwork Aquarium, a canceled game that returns almost 30 years later. Its launch is planned for the second quarter of this year for Nintendo Switch and PlayStation 4, in digital distribution by ININ Games and in physical format by Strictly Limited Games. Later it will be announced on other platforms.

Clockwork Aquarium It was developed by Westone Bit Entertainment until 1993 but was never completed. It was an ambitious 2D adventure that took the Sega System 18 arcade board to the limit., but the rise of 3D forced its cancellation in 1994; was designed by Ryuichi Nishizawa, creator of Wonder Boy/Monster World. Strictly Limited Games obtained the code to save it from oblivion thanks to the collaboration of some of its original creators. “Clockwork Aquarium It is a great piece of 2D art in which the pixel artists put their hearts and souls, “said Nishizawa.” I want to express my warmest respect and gratitude to those who have worked so hard to restore it. “You can find out more with our column What It could be, where we talk about their problems and the focus on the three-player cooperative.

The three physical editions that you can reserve

There are three limited editions for consoles that are reserved exclusively on the Strictly Limited Games website. The limited edition is priced at 29.99 euros and at the moment you can only buy the PS4 -it has been sold out on Switch-. The Collector’s Edition is priced at € 69.99 and includes among others an acrylic diorama, original and remixed soundtrack, 100 yen arcade-style coin, art book and character postcards. Ultra Collectors Edition for 129.99 euros it includes everything in the collector’s edition plus an 18-centimeter figure. 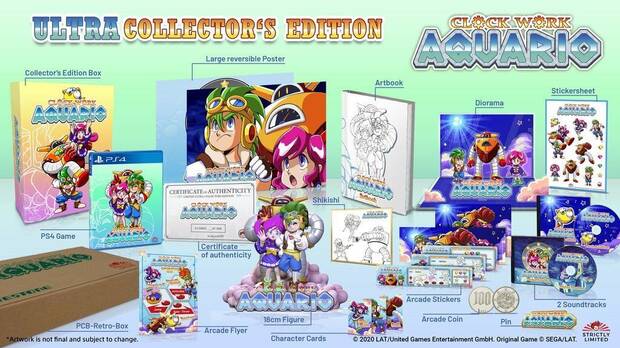