A father has built “the definitive simulator of Mario Kart“ for your son. As if it were one of the simulators used by professional pilots of motorsport for training, the apparatus vibrates, turns and tilts interpreting the movements of the video game kart.

The father, David Wiernicki, is also the founder of the company Force Dynamics, dedicated to making machinery of this type. His latest invention has been featured on the YouTube show Totally Game from Barcroft Studios and Future, where he shows the device in action competing in a race of Mario Kart Live: Home Circuit against his son.

Wiernicki has used the augmented reality game for the Nintendo Switch as a template for the device. The movements of the radio-controlled kart are reproduced by his inventionAs shown at the beginning of the video: when you pick up the car with one hand and swing it, your simulator (in which your child is sitting) leans strongly in the same direction.

“This is the best possible version of Mario Kart. Our machines can move a lot. You really feel what is happening“explains Wiernicki. The simulator has three hydraulic struts that react to the movement of the toy kart, a wheel under the seat that rotate the device on its axis and accelerometers that send the data to a computer which, in turn, tells the machine how to move. 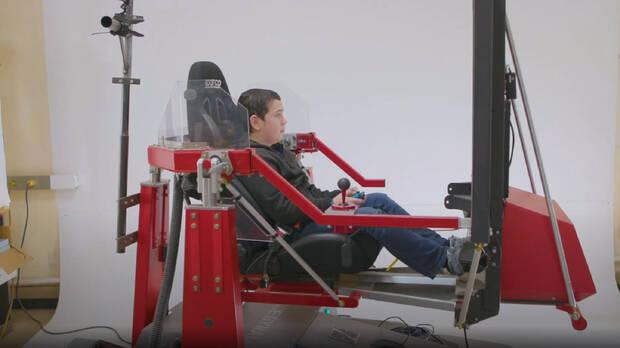 The invention does not lack a television to be able to play this augmented reality title in which the circuits are built using the markers included in the game. “Video games are something that transports you to another place”, dice Wiernicki, “[algo] that make you believe that you are doing something that you could not do otherwise. “

Home Circuit is an innovative proposal for the saga Mario Kart

Although it is difficult for you to recreate at home the experience created by Wiernicki and his son, himself Mario Kart Live: Home Circuit it is an innovative proposal. “[…] we love its premise and it seems to us an idea as interesting as it is original “, we said in the analysis. “We can assure you that the most little ones in the house who are still getting started in this video game they are going to enjoy the beauty with him and that his ‘toy’ function it fulfills it to spare “.

Disco Elysium: Final Cut is out now and presents its launch trailer